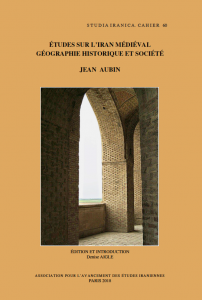 Summary
Jean Aubin (1927-1998), historian specialist of pre-modern Iran and of the history of the Portuguese in the Indian Ocean, was Research Professor at École Pratique des Hautes Études and at the School of Advances Studies in Social Sciences (EHESS, Paris). His work on the Ilkhan domination, on the acculturation of the Turkic-Mongolian elites, on caravan roads and networks, on hagiographic literature were widely spread. They have strongly helped advance historical thinking on poorly known societies. Jean Aubin’s style gave the latter new life, in historical geography especially, his field of excellence. However, his publications, dispersed in a large variety of journals, have often become of difficult access. This volume brings together articles published for about sixty years, which illustrate the pioneering aspect of Jean Aubin’s reflections on themes not much studied at that time by the specialists of Iran.
The first part of the compendium deals with the relationship between road networks and commercial activities, as well as with the strategic importance of communication channels in times of conflict. The second part sheds light on the role of religious and cultural elites when Iran was under domination of powers of nomadic origin. The third and fourth parts concern the Ilkhans, with articles on Mongolian Azerbaijan, questions of acculturation and the collapse of the empire and on the emergence of the State of the Sarbadars in Khorassan.